The story behind the 19th century City Theatre 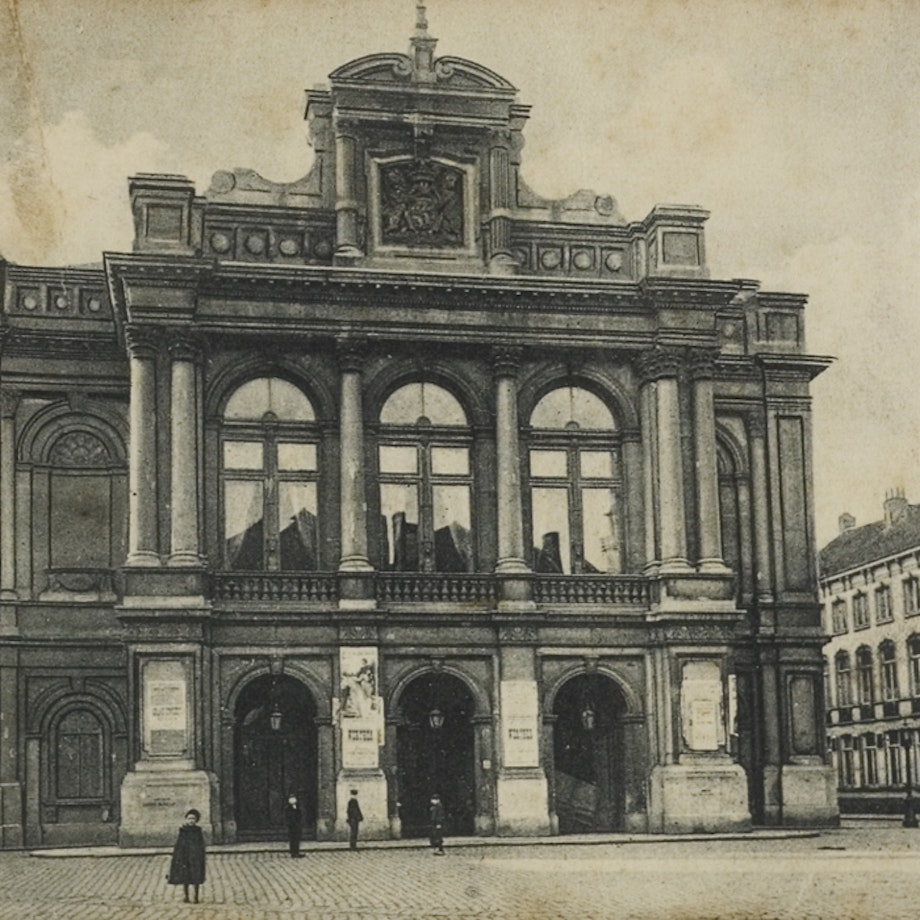 A once flourishing commercial quarter gets a new role

The area of the city where the new Municipal Theatre was built had long been the beating commercial heart of Bruges. The River Reie flowed there and at one time there were several stately nation houses around the old Beursplein. However, at the end of the 18th century it is decided to close in the Reie, so that all harbour activity is transferred to the edge of the city. Even so, the old commercial quarter retains its medieval structure and layout. The streets are narrow and dark. There are a number of larger buildings, such as the 'Comedie (Salle de Spectacle)', but also lots of small houses. The area is inhabited by a mixture of the rich and the poor: merchants, an apothecary, a tailor, a blacksmith.... The cellars of the houses are often rented out to brewers. Some of them are turned into cabarets and small bars, where illegal prostitution is commonplace. This gives the area a bad name and the police often have to intervene to restore order. 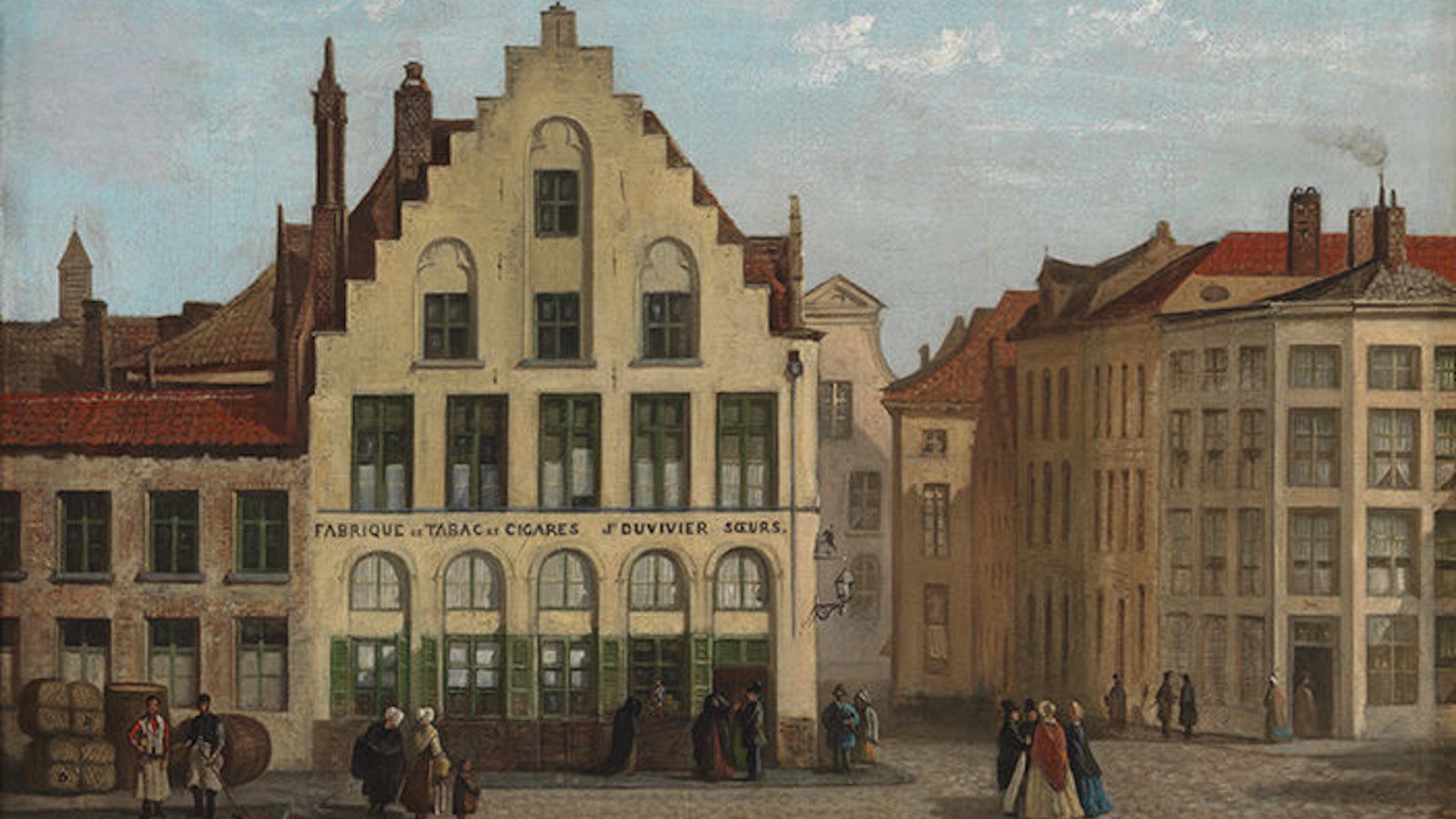 The pre-history of the Municipal Theatre dates back some 275 years. In 1746, a number of Bruges' wealthy citizens found a music society to promote musical life in the city: the 'Concert de Musique'. This society organises salon and chamber concerts at a variety of locations. Because they need to go to Ghent, Brussels or Antwerp if they wish to organise larger events, ten years later they decide to look for a suitable location in their own home town where they can hold orchestral concerts, balls and operas. They buy the property known as 'De Grandt' on the corner of the Vlamingstraat and the Eistraat. During 1756-57, the building is transformed into the 'Comedie' (Comedy). When this concert and theatre venue requires renovation 75 years later, it is decided to knock it down and build a brand new theatre. 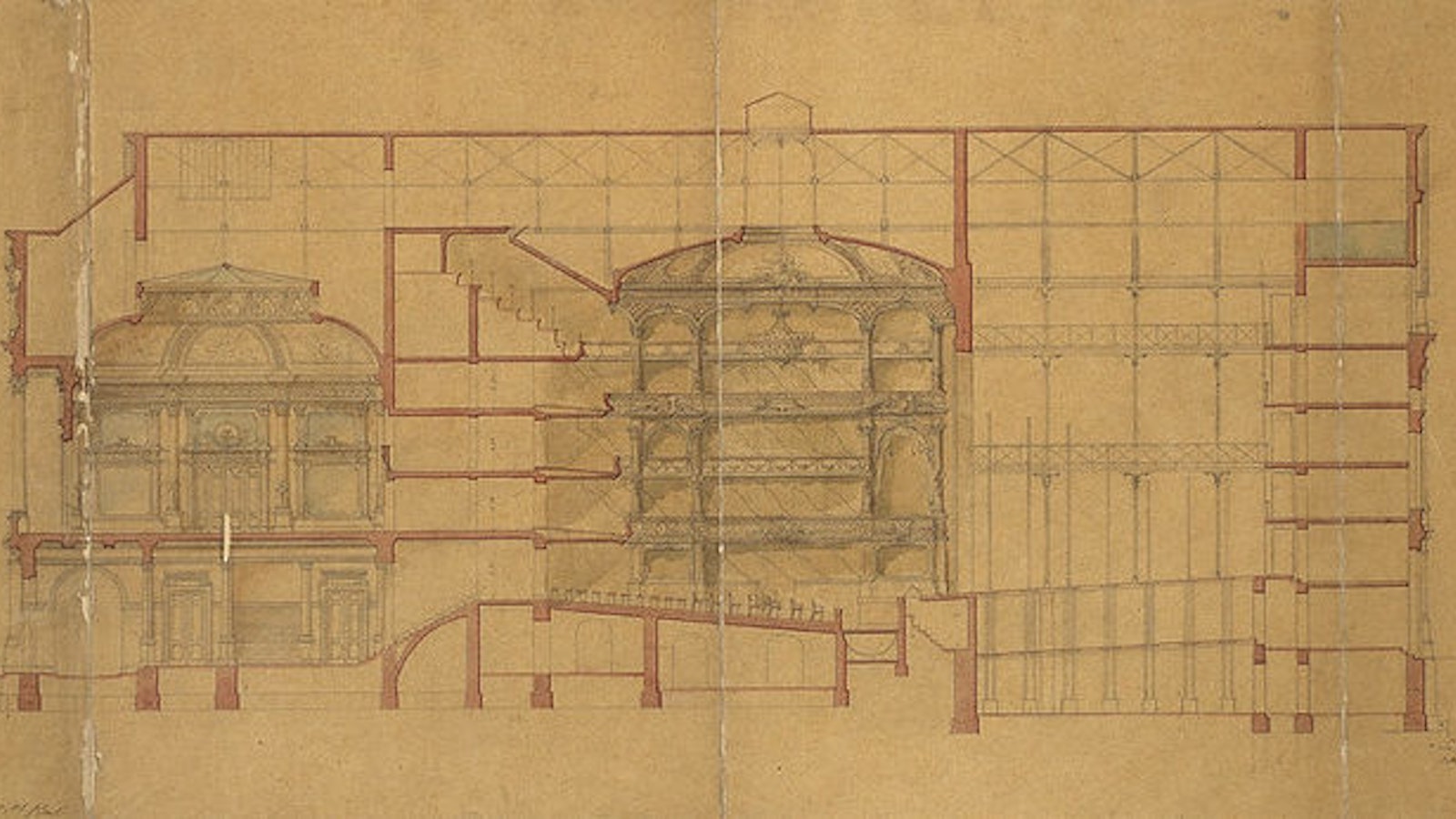 Jean Brunon Rudd (Bruges 1792 – 1870) has been the city architect for more than 40 years. Already in 1847, he is asked to make plans to close in part of the Spiegelrei Canal, so that a new theatre can be built. However, a year later the young Bruges architect Isidore Alleweireldt (Bruges 1824 – Ostend 1892) argues that it would be better to build the new theatre in the area of the old 'Comedie'. A decision is deferred but in 1864 Burgomaster Boyaval reopens the discussion. City architect Rudd is now tasked to make a design for a new theatre on the site of the 'Comedie'. The project is given an extra boost when Alderman Van Nieuwenhuyse put forward a proposal for a larger, free-standing building. In 1865, five architects submit plans in keeping with this proposal. The choice falls on the design of Gustave Saintenoy. He builds the theatre between 1867 and 1869. 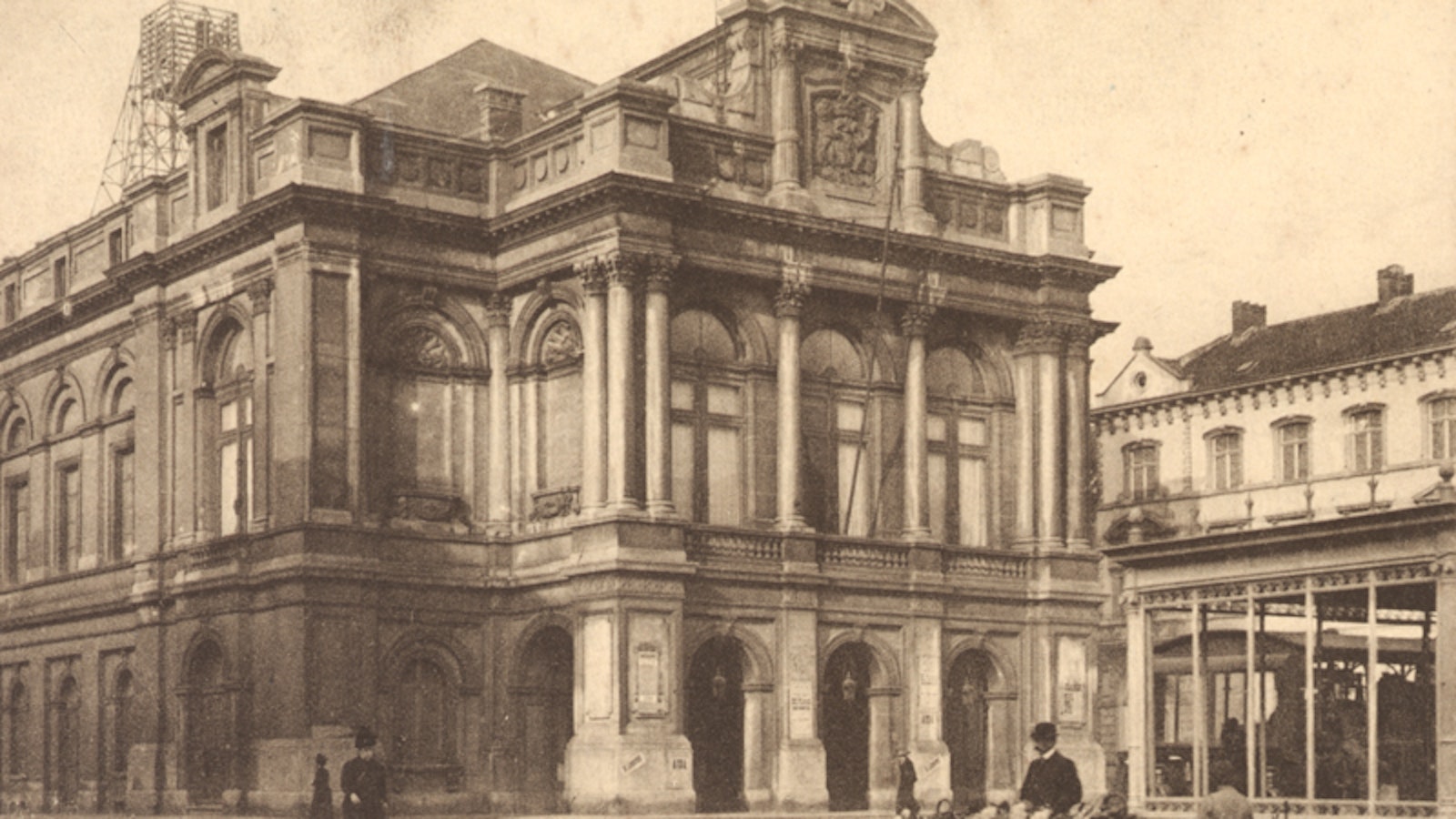 Gustave Saintenoy is a relatively young architect from Brussels. He is just 33 years old when he submits his plan to the city in 1865. This plan envisages a theatre built to the highest and most modern standards. In 1866, he modifies his plan, removing a planned dome above the foyer and adjusting some of the other measurements. The staircase is widened and the auditorium is given an elliptical shape, because this is better for the acoustics – an evolution (from long and narrow to more round or oval halls) that is seen in many other theatres built at this time. 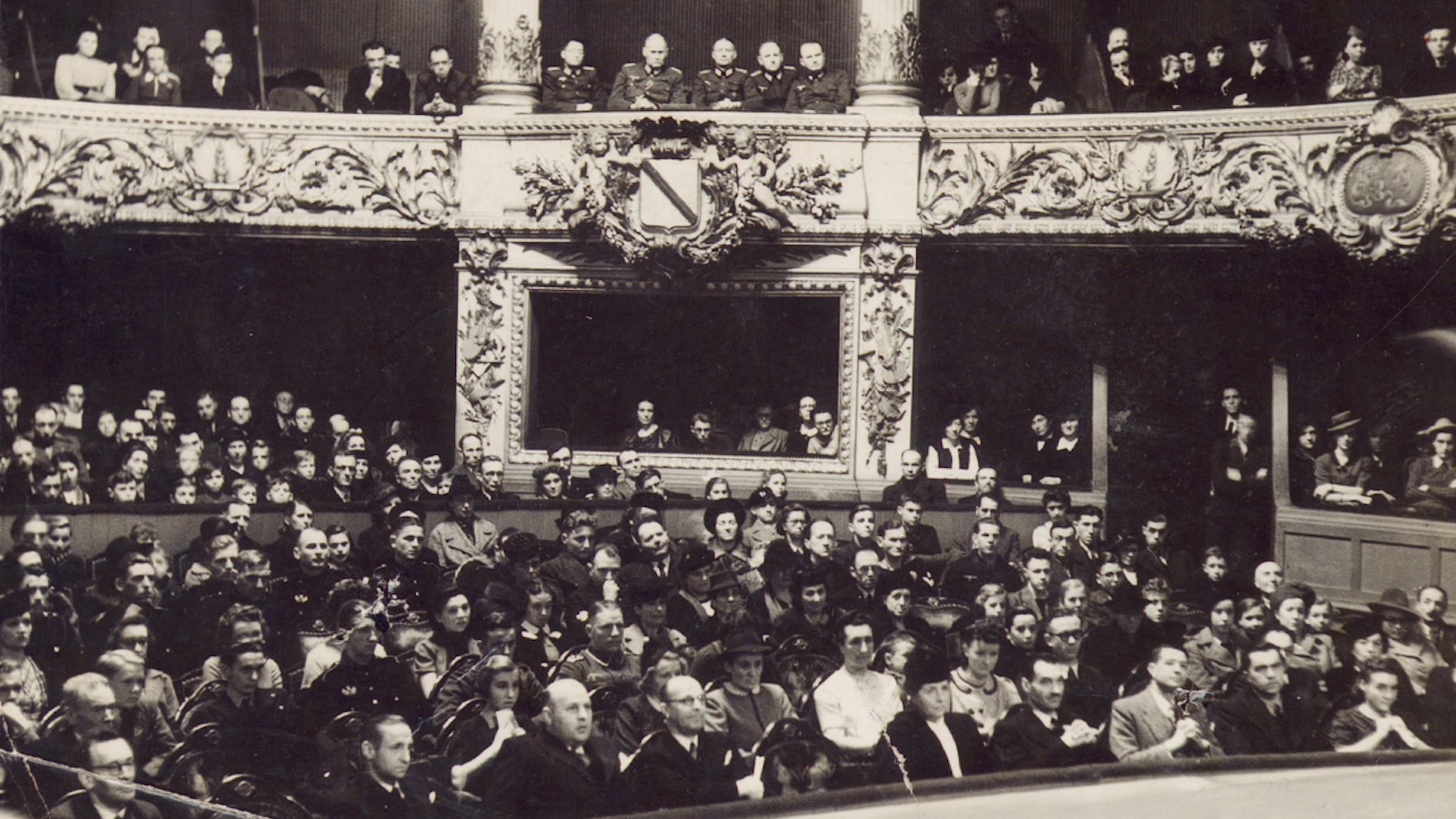 Seeing and being seen

The public come to the theatre to watch and to listen. Social status plays a role: the richer you are, the more you pay and the better your seat, both in terms of visibility and comfort. There are seats in all different shapes, sizes and price categories, with different entrances for the different types. The podium slopes from back to front, to improve overall audience visibility. The use of special opera glasses and theatre binoculars makes the performers even more visible. To the left and right of the orchestra pit there are two special loges, one for the burgomaster and one for the provincial governor. These are loges where it was just as important to be seen as to see.

The directors and the programme

Like the old 'Comedie', the new Municipal Theatre is run by a series of temporary directors. Once they have applied for the job and been appointed, they need to put together their own 'troupe' of actors and musicians. Their programmes of comedy-opera, comedy and vaudeville need to be approved in advance by the municipal authorities. The directors are usually appointed for a period of one year. Sometimes the City breaks the contract; sometimes the director just leaves, usually because of disappointing results. These directors often come from France; not only from Paris, but also from more distant French cities. 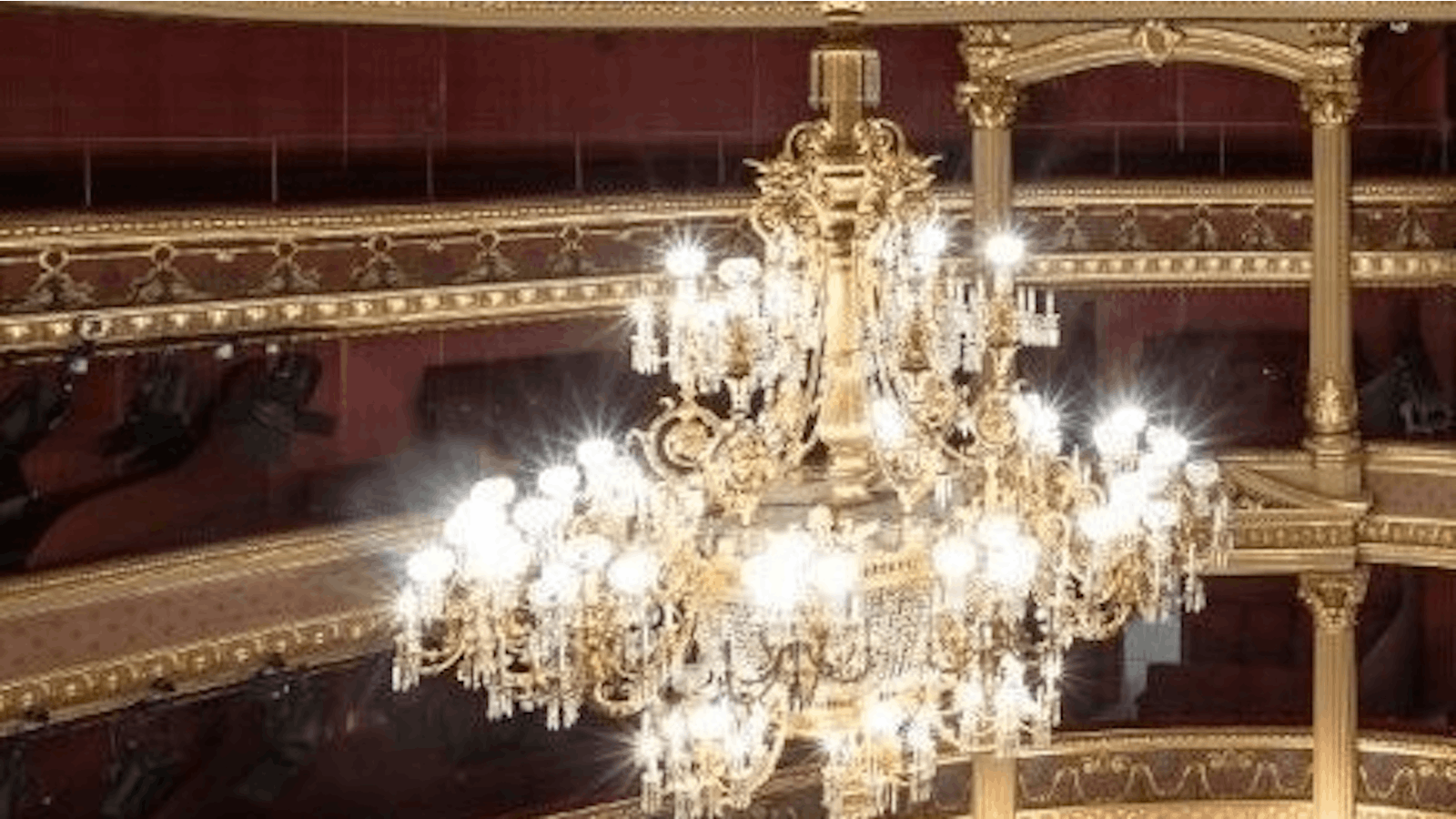 The interior: central heating and lighting with gas

In his design, Saintenoy also devotes considerable attention to the comfort of the theatre-goers. The lighting is gas-powered and there is a huge chandelier above the main theatre hall. The vestibule, staircases, corridors, foyer and salons are lit by a combination of smaller chandeliers, lanterns and wall-mounted sconces. Because good ventilation is also important, a modern ventilation and heating system is installed under the seats in the loges and the stalls. This system works with coal-fired burners that heat up air which is drawn in from the street outside and then pumped under the seating through a network of ducts. The stage, backstage and other service areas are heated in the same way. There are also radiators throughout the building, with open hearths and coal stoves in the various salons next to the foyer. 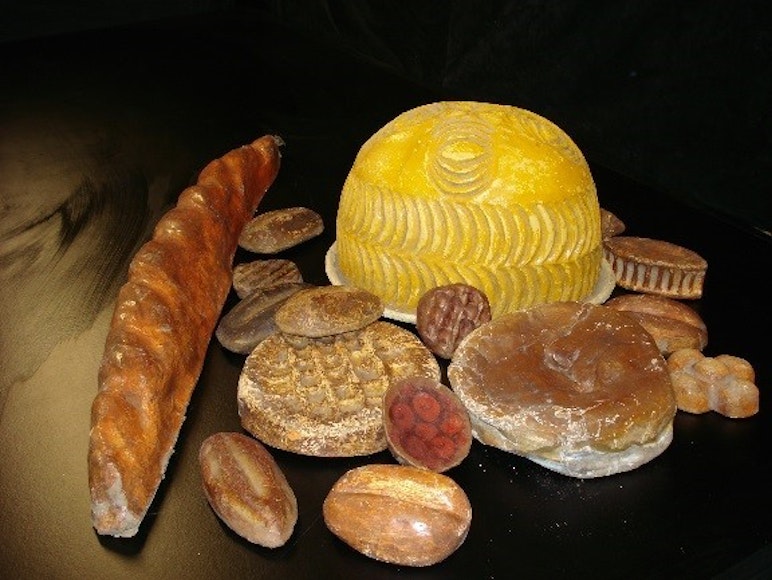 In the 19th century, each theatre has its own store of different types of scenery. The travelling groups of performers usually move from place to place by barge or train, bringing with them their own costumes and props. Smaller items of scenery are stored in the cellars or in the line sets of the fly system in the stage house. In the Municipal Theatre, a number of old backdrops of a 'Forêt' (forest) still survive, as do twenty or so set items and pieces of stage furniture, along with sixty or so stage props. This historical collection of props and scenery in Bruges is the largest in Flanders.