The return of Archduke Maximilian of Austria to Bruges

Musea Brugge has acquired an important late 15th century drawing depicting the arms of alliance of the houses of Austria and of Burgundy on an escutcheon. 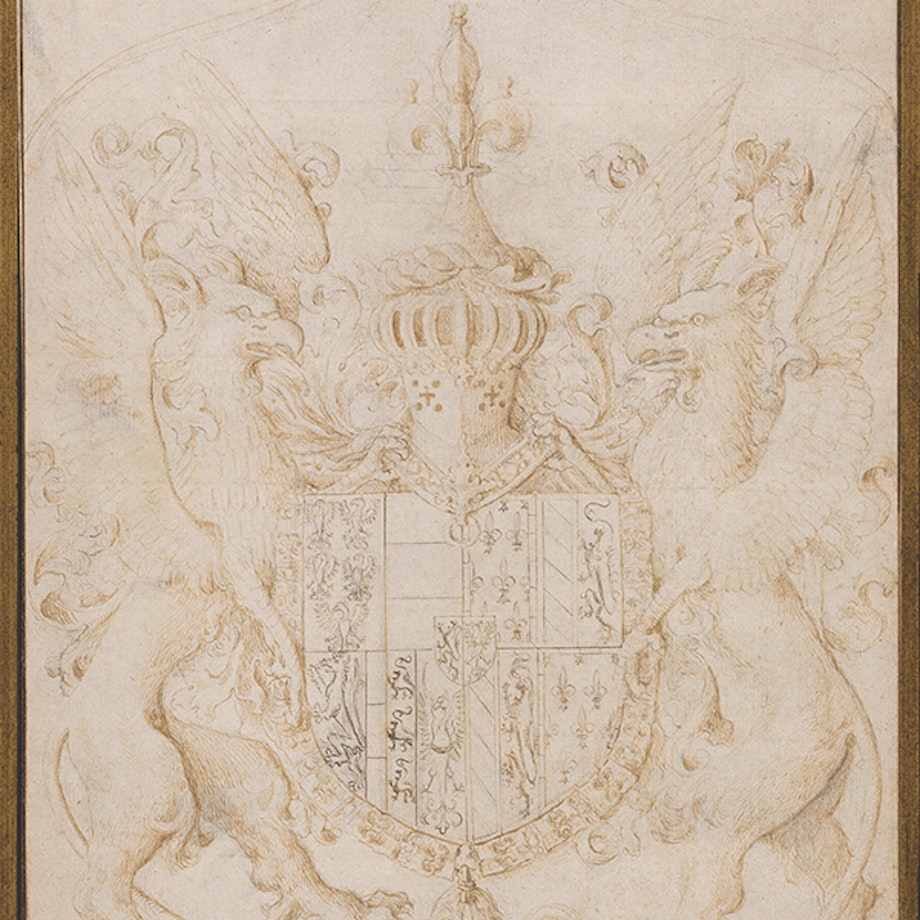 While welcoming visitors from Europe and abroad and permanently monitoring the health situation, Musea Brugge has acquired an important late 15th century drawing depicting the arms of alliance of the houses of Austria and of Burgundy on an escutcheon. The drawing was previously in a private collection and unknown to the scholarly community. It is executed in brown and black ink on paper and despite the fact that the ink has faded in time, all the details and the skillful execution of the subject can still be fully appreciated.

The drawing depicts on the right of the shield the arms of the (Burgundian) dukedoms of Burgundy, Brabant and Luxemburg and on the left the arms of the (Austrian) dukedoms of Lower-Austria, Austria, Styria, Carinthia and Krain (Slovenia); the smaller coat of arms in the center represent the counties of Flanders (Burgundy) and Tirol (Austria). The escutcheon is supported by two heraldic griffins; a tournament helmet serves as its crown while the crest takes the form of a lily. Finally, the shield is accompanied by the chain of the Chivalric Order of the Golden Fleece.

No less than three rulers of the Burgundian Netherlands carried the very coat of arms: Mary of Burgundy used the arms of alliance after her marriage to archduke Maximilian of Austria in summer of 1477 until her untimely death in 1482. Her husband, archduke Maximilian carried them as consort of the heir to the Burgundian territories until he was elected in King of the Romans in Germany in 1486; finally, Philipp the Fair, their first born son and heir, carried the same coat of arms until his marriage with the Spanish princess Juana in 1497.

The fact that the escutcheon is accompanied by the Golden Fleece rules out Mary of Burgundy; the chivalric order, founded by Philipp the Good of Burgundy in 1430, only had male members.
Maximilian became a member of the Order and served as its Souverain in 1478 during the Chapter meeting that took place in the Church of St. Salvator in Bruges. The event is described in the Excellente Cronike van Vlaenderen (Excellent Chroncle of Flanders) two copies of which – one kept in the Library of Bruges and one preserved in the Royal Library of Brussels – illustrate the event. The miniature of the Bruges’ copy shows how the kneeling archduke receives his accolade. The escutcheon depicted below shows the identical arms of alliance than the drawing.
However, Philipp the fair also carried the coat of arms as witnessed by the shield of the Golden Fleece that was made for the Chapter meeting in Malines in 1491.
, founded by Philipp the Good of Burgundy in 1430, only consisted male members. Maximilian was admitted to the Order and became its Souverain in 1478 during the Order’s Chapter meeting in the Church of Our Lady’s in Bruges. Philipp was introduced into the order three years later (age three) in 1481 at the Chapter-Meeting in ‘s- Hertogenbosch in 1481. The first event is described and illustrated in the Excelente Chronyke of Flanders, kept in the Municipal Library of Bruges; the miniature displays the identical coat of arms.

The identification is only possible on the base of the shield’s support: Griffins were used by Maximilian as part of his personal iconography until the sixteenth century, when Dürer designed the Triumphal Arch of the Emperor. The archduke’s coat of arms is supported by griffins on seals used on documents issued in Bruges and elsewhere in Flanders around 1485. Philipp the Fair, in contrast, used heraldic lions as shield-holders. The year – 1485 – corresponds with the date associated with the watermark found in the paper, a gothic P. Very similar watermarks are found on documents dating from 1475 until the 1490s from the Low Countries, the closest one being a document issued in Nijmegen in 1478.

The historical significance of the drawing for Bruges and its Musea does not have to be explained. The city was among the favorite residences of Mary of Burgundy and archduke Maximilian, the funerary monument of the Duchess can be still admired in the Church of Our Lady’s. While Maximilian became regent of the Burgundian Netherlands after Mary’s death in 1482, the legitimacy of his rule was questioned by the Four Members of Flanders who recognized his rule not in his own right but only as regent for his minor heir, the future Duke Philipp the Fair. The ensuing conflict led to several uprisings against Maximilian and eventually to his imprisonment in Bruges in 1488.

In addition to its historical significance, the drawing is also a fine example of a drawing from the Low Countries made during the time of the executed Flemish Primitives. The drawing has been skillfully conceived and the manner that contours and hatching were applied points to an experienced artist who was well-versed in depicting heraldry. While the exact function of the drawing is unknown it reminds us that designs for ephemeral decorations, painting shields for tournaments or chapter meetings accounted for a significant part of painters’ activities during th 15th century. Because of its subject, the drawing is reminiscent on a engraving depicting the Coat of Arms of Burgundian Duke Charles the Bold made by printmaker Master WA. While it seems possible that the printmaker also was responsible for this drawing, the attribution remains a matter of speculation. 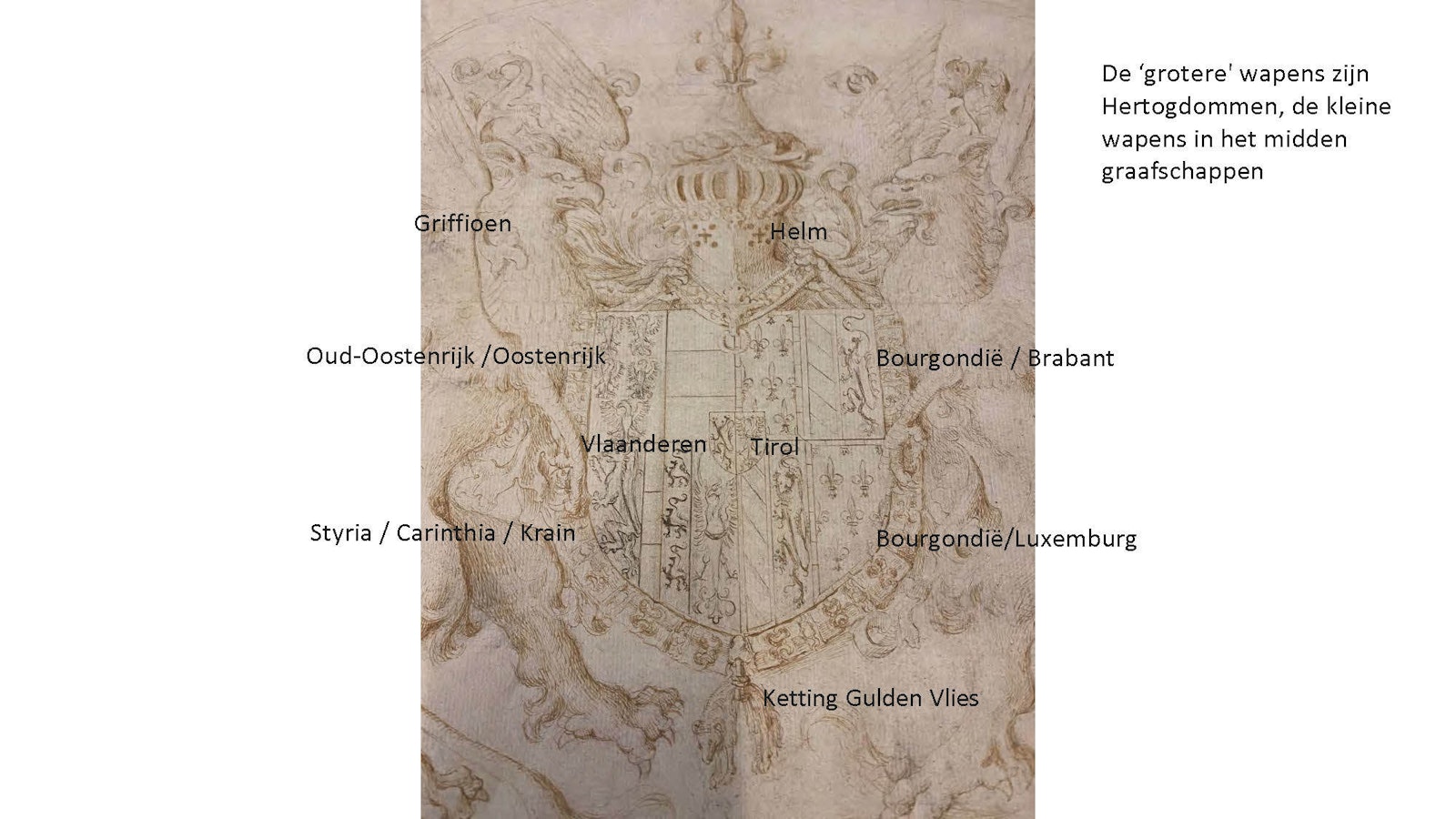